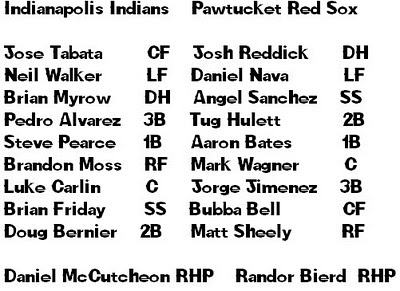 And YES, Lars Anderson is in town. I'm inclined to dislike Anderson, because not only was he a jerk to a friend of mine, but I have heard from multiple sources that he's kind of a tool. I'm sure people he works with will say otherwise - especially media types - but he's probably a lot nicer to them anyway.

THAT BEING SAID, I am going to try and remain unbiased. Even though I was just getting used to Aaron Bates. And also, Anderson subbed for Wagner in the sixth and grounded out.

Randor Bierd pitched five innings and zzzzzzzz. Can we talk about Robert Manuel? YES. Manuel has yet to allow a run in twelve innings, including the two hitless ones tonight. Manuel DID walk Brian Friday and Neil Walker, but word on the street is that the Indians are evidently The Men Who Stare at Pitches. They said it on the air on the radio! And not only that, but shortly after I did my Channel Zero Investigative Report on RM, he was the pre-game guy on Rhode Island Conservative AM Radio! He is currently my favorite.

Pawtucket's only run was Reddick's solo home run in the sixth.

i've been uh... working out:
1. Daniel McCutcheon threw 103 pitches. Again, it always amazes me how visiting teams have no problem working their starters in contrast to Boston's conservative minors approach. Except for Hansack, because he is A LEGEND.
2. I didn't go to the park because it was cold and the days where I subject myself to that crap are over. I tried watching it on TV, but there were tech problems and they only showed about three innings. It was so bad. I did enjoy Randor Bierd's crazy balk and the pre-game interview with that woman who ran a half marathon or was an Olympian or something. It's for charity!
3. Wil Ledezma was once again an effective closer and was credited with the save. I think he is so great.
4. Bubba Bell made both a fielding error and an assist. So they cancel each other out. I love Bubba Bell. Maybe we can be roommates one day.
5. Catcher Luke Carlin went 2-4 with a triple.

Oh, yeah, one last thing. While there are some great Pirates blogs, there's almost zero coverage of the Indians. I mean, compare it to Buffalo or even like Lehigh Valley. I keep searching for stuff and it's pathetic. Maybe I'll do it!