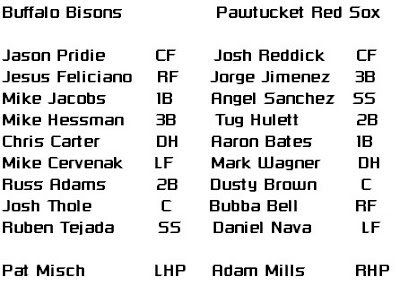 Maybe Mets fans would be a little less bitter if they saw a Bisons game like this one. 10-3 with Pawtucket at the ass end. Mister Pat Misch went seven innings for the Herd and got the win.

Red Sox starter Adam Mills was kind of a disaster. Mills gave up eleven hits in five innings. Six runs under his watch, although it should have been more. Even the outs were hit hard.

Reliever Chad Paronto pitched the next two innings and allowed four more runs. Ramon Ramirez managed to polish off the last pair of innings without crapping his pants.

Getting back to Buffalo: Since when is Jason Pridie not a useless batter? And what's with Jesus "Daywalker" Feliciano going 4-5 with a home run? RUSS FREAKING ADAMS WENT 3-5!!!

Mike Cervenak also had three hits. I'll bet he was all hot and sweaty.

And then there's Mike Jacobs, who also cranked out a homer. right after Feliciano! Jacobs was so fresh to the team that his jersey was nameless. Furthermore, his number 44 was just a couple of upside down h's.

the schwartz:
1. It was technically Star Wars day, but it was weak compared to last year.
2. Mike Jacobs needed a triple to complete the cycle.
3. I attended this game, but...