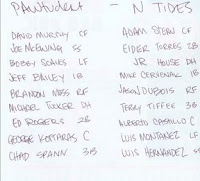 Holy God, this team is bad right now. I've missed a few days because of work-related work... but can I really say I MISSED them?

LHP Abe Q Alvarez started for Pawtucket. He gave up eight hits and five runs in five innings. Quality start? Maybe if you are the New York Yankees or something. If you are the weak-hitting Pawtucket Red Sox, then you are doomed. Alvarez also walked three guys and gave up a home run to Terry Tiffee. Terry Tiffee! That guy's still plugging away!

Alvarez was relieved by Hansen for two innings. Another run was scored under Craig's watch. He is Bad Craig. Breslow is Good Craig, but Breslow didn't pitch the ninth. It was Brian Corey, who played in Japan for a while. Corey did not allow the Tides to score further, because he is phat like that.

LHP Kurt Birkins started for Norfolk and got the win. 65326. That is, six innings, five hits, three runs, two walks, and six Ks. I may present those stats in zip code form from now on. My idea, don't steal it. Birkins only faltered when he allowed a three-run homer to Mike Tucker.

The fucking huge right-hander Francis Beltran jumped in after Birkins and between him, fastball machine and talented youngster Jim Hoey, and closer Corey Doyne, they kept Pawtucket scoreless the rest of the ride. Yee-haw.

Offense: Tucker hit a three-run home run, which I just told you about. For Norfolk, Adam Stern had three RBI. He played center, if you are curious. He still looks like Adam Sandler.

Two things:
1. I will be at the game tonight. Pawtucket WILL win. Hansack is starting. Do you find him attractive at all? Don't answer that.
2. Congratulations to Travis Hughes, Brandon Moss, and Craig Breslow. They are all going to the AAA All-Star Game in Albuquerque. They're pretty lucky, since I've never been to New Mexico. Corey Doyne and JR House of the Tides are also going, so I guess that gives everyone something to talk about during warmups.
3. By the way, the Counting Crows are playing at McCoy some time in August or July. Feel free to attend. Am I going? Are you kidding? I'm only going if Joe McEwing is going. With me after he picks me up at work.
4. Fourth game in a row they've lost!
5. Shea Hillenbrand has been DFA'd. I do not get this guy. He loves animals, has like a rescued animal zoo, takes care of the kids, but on the field is an absolute tool. Must be the steroids.
6. Barry Hertzler is back in Pawtucket. He pitched the other day and it was horseshit. Of course, it's hard to shoot for a win when your starting pitcher is MIKE BURNS. Why did he start? Why anything? I had tickets to that game, I think, but I couldn't go because I was busy being sizzled alive in a Massachusetts parking lot.

What are you gonna do when somebody gives up 10 hits?

"That's too many digits."

I was thinking of my telephone number."

Also, better round off the thirds of innings.

But anyway, maybe for each one you do, the first person IN that zip code who writes in wins. I can't wait for the nights with that contest. I imagine the things it'll do. I just want to be loved by it.

There's a lot going on in your comment and you have given me a lot to think about.

I'm waiting for the sun to shine.