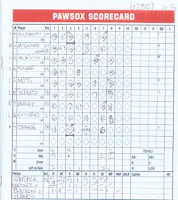 And how! Devern Hansack is a righty and he is a former lobsterman and he pitched for five innings. He gave up eleven hits and five runs. Not great, but Pawtucket I don't know. Edgar Martinez pitched the sixth and seventh and did a mighty good job. Breslow took over the eighth and worked hard to get out alive. No runs for Martinez and Breslow. And Travis Hughes closed it out, bang.

And look who pitched for the Tides... righty Tim Kester! He was a AAA All-Star when he was with Pawtucket. The year was 2005. I'm sure he wanted to pitch well, but he didn't. Nine hits and seven runs in 2 2/3 innings. Reliever Andy Mitchell gave up the other two runs. Jim Miller and Steve Green also pitched.

Chad Spann hit a home run and many other kids did good. Jacoby Ellsbury worked his ass off out there, going 3-5 with a triple and a couple of stolen bases. You've heard how fast he is... but yeah, he runs very fast. Jeff Bailey also stole a base, in spite of being unfast. Bobby Scales continues to be a slim killer with his hits and RBI. Only George Kottaras did not get a hit. He struck out three times! That is unacceptable! George Kottaras and Craig Hansen ≠ Jason Varitek and Derek Lowe.

For Norfolk, JR House and Mike Cervenak went back-to-back in the third. They were trying to prove once and for all that Mike was taller. Cervenak also homered in the fifth. Cervenak also doubled. He also stopped on the way to the on-deck circle to rescue some kittens from a pine tar fire.

Hooray, the PawSox!
1. The nat'l anth. was sung by a barbershop quartet called the Lincoln Continentals. I was reading something somewhere about Things That Everyone Likes and barbershop quartets was one of them. True!
2. There are some serious honeys on the Tides. What a fine looking team. Hottest visitors so far.
3. It was Fugly Hat Night at McCoy. I also got in for free, thanks to some guy giving out free tickets. But you should have seen the hats that everyone was wearing. Even for free... seriously, seriously ugly.
4. The pitch speed meter was operational!
5. The roster photos for the Tides are weird. They look like Spooky Story Flashlight Faces.
Tonight's trivia question (which I knew the answer to): Who was the winning pitcher in Game 4 of the ALCS in 2004? YES.
7. Tim Kester still looks an awful lot like Chandler Bing.

By the way, if at all possible avoid the Pawtucket Walgreen's on the corner of Goff and Broad. This is the second time in a row I've stopped there and then left without buying anything. The lines are ALWAYS ten people long and it is at least a fifteen-minute wait. Plus crazy people, but crazy people I can handle.