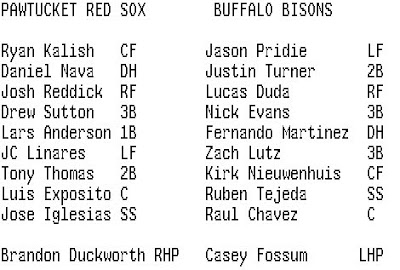 Pawtucket WINS! Exploding offense all over your face! 15-1 and Duckworth gets his first win!

No, it would be better if we discussed the offense. It's mostly Casey Fossum's fault. Fossum started the game great, striking out Kalish. but then he walked Nava and Reddick and Drew Something singled to load 'em up for Anderson. Anderson flied out to left, scoring Nava. 1-0 Pawtucket.

Fossum got his shit together for a little while, managing not to bring shame upon the great city of Buffalo... Until the fourth inning. Fossum was so enraged by Lars Anderson's mall-rat coiffure that he hit him with a pitch. JC Linares was next up and he very calmly hit a double, scoring Anderson, only partly because Pridie effed things up in left.

Fossum then got Tony T to strike out (Thomas would later have his revenge) but Exposito got hom good with a double to left, scoring Linares. 3-0! And then a fourth run from a Ryan Kalish RBI single.

Fossum powered through the rest of the fourth, probably with great help from his ripped physique. The fifth inning was another slew of problems. It started off with ass-to-ass doubles from Nava and Reddick and a one-out walk to Anderson. Shivering newborn Dylan Owen took over and the poor thing. Linares homered. Had I been little Dylan Owen, this would have crushed me. But he somehow managed to get the last two outs and walked back into the dugout.

Owen came back out for the sixth inning, maybe breathing a little easier? Pawtucket singled three successive times to load the bases with no outs. A fielding error during Reddick's at-bat got the fifth run over. Then Owen walked Sutton with the bases loaded to make it 6-0.

Anderson and Linares both struck out after that, and then Tony Thomas grounded out to end the inning. WAIT! I can't believe you fell for that... What really happened was Thomas hit a home run which was a grand slam which makes him the RBI-est guy in the IL. I should probably sponsor him instead of Rich Hill.

Pawtucket reliever Tony Pena gave up the sole Bisons run in the seventh. Okajima and Rice somehow managed to keep the game from getting away from them.

I remember Okajima's fever:
1. Worst loss in Buffalo's history. It was freaking freezing to boot. Take it away, Tyler Dunne!

I'm way too fidgety to finish this, sorry. I may come back later if I'm not too impaired. Kris Johnson's starting today and the small, mean, petty part of me I cannot suppress is hoping he goes down in flames. Super sexy righty Dillon Gee should have no problem making Johnson look like dogmeat. I think.