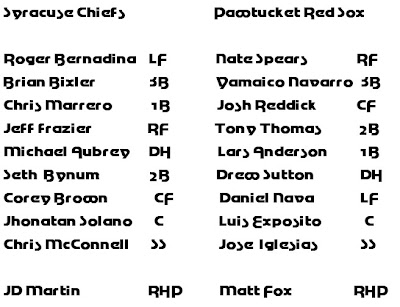 I don't want Matt Fox to be another Adam Mills. Fox pitched well last night.... Or Syracuse played poorly, either way. Pawtucket won 5-1 and Fox went six, giving up one run (solo homer by outfielder Corey Brown) on four hits. Fox had six strikeouts and the Chiefs certainly have something to say about that!

Righty JD Martin started for the Chiefs and it didn't go so well. Martin was pulled in the fourth inning after striking out Yamaico Navarro. He started off okay, thought, gettting the side to fly out in order in the fist inning.

But the second inning... Tony Thomas, animal that he is, led it off with a home run. No joke, folks. Photos prove it was Tony Thomas and not Mark David Chapman hitting that home run.

Anderson and Nava each singled and then catcher Luis Exposito made it to second on a wacky outfield error, bringing Anderson home.

Innings 4-9 were essentially all bullpen, as all the run-scoring was in bed for the night. Clevelan Santeliz pitched 1 2/3 and Bowden came in for the rest, sort of looking like 2010 Michael Bowden when he immediately gave up back-to-back singles in the top of the ninth. He sure is good at fixing his fucking pants after every pitch, though. Damn you look good, son.

fast cars, cheap thrills, rich girls, fine wine:
1. The 30th anniversary of the Longest Game in Baseball History celebration was very low-key. Dave Koza threw out the first pitch and there was a video. That's it.
2. Lars Anderson went 3-3 with a double. GOD, HE'S SO ANNOYING!!!
3. Tony Thomas is second in the IL for slugging and OPS. I'm sure you know all about him, but three months ago I hadn't even heard of the guy. And now this. This is why I love baseball.
4. Santeliz was replaced by Bowden because he felt something funny in his back.
5. "JD Martin seems best suited to the role of starting pitcher and is well known to both Knorr and Syracuse as the staff ace the past couple of years. He doesn’t have the kind of stuff needed to be a true relief specialist whereas Chico still might and it might be a way for Chico to find his way back to the majors." - comment by 'peric' on 'Nationals Arm Race'
6. Brian Bixler has a weird batting stance and holds his bat strangely. Jeff Frazier has serious asshole face.
7. "Yamaico Navarro se fue de 6-2, con su quinto doble y recibió cuatro bases por bolas en la doble victoria en casa de Pawtucket (Boston) por 2-1 en 10 entradas y 10-6 sobre Buffalo en la Liga Internacional." - 7dias
8. I can't remember where I read this, but someone said, "Jose Iglesias is slumping." I hope that person was not even serious.
9. Oh, here it is!

PS Jim Martin was doing PA last night. I WAS INFORMED THAT HE HAD RETIRED. Why are you messing with my emotions?
Posted by Jenks at 6:46 AM