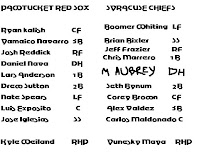 Syracuse WINS! 3-2 in nine innings. This was the first game of a double-header. Heretofore perfect reliever Jason Rice takes the loss for the Red Sox. Righty reliever Adam Carr takes the win for a game started by Yunesky Maya.

Starting for the Pawtucket Red Sox, weighing in at 195 pounds, the Notre Dame flame... Kyle Weiland! Weiland pitched his fine self into the fifth inning, giving up only one run to the Chiefs, but after Syracuse catcher and former beloved Pawtucket player Carlos Maldonado doubled and Bixler singled and the other guy walked... The other guy, out in right... Frazier! Frazier walked to load the bases and it was curtains for Kyle Weiland. Pawtucket's puny 2-1 lead was in great danger.

Enter Rich Hill (Don't mind if I do!) (Ew.) Hill was like, Fuck this shit, and he got the last out. Hill even came out for the sixth and would have had an out right away with DH Michael Aubrey, but Yamaico Navarro made an error and Aubrey was safe at first.

Second baseman Seth Bynum then grounded out to advance Bernadina... Wait, did I tell you that Roger Bernadina was pinch running for Aubrey? SYRACUSE WANTED TO WIN, DAMN IT! Center fielder Corey Brown then rather conveniently hit a line drive single to right, scoring Bernadina. One unearned run for Hill, who was lying back and thinking of England on the mound. Tie game!

Jason Rice succeeded Hill, and was not doing too badly when Iglesias made a fielding error in the ninth, allowing Maldonado to reach base. Uh-oh. Another pinch runner, which come on... Who needs one when you have the lithe, speedy Maldonado wreaking havoc on the basepaths?

A single and a walk loaded the bases and then Yamaico Navarro couldn't handle something Jeff Frazier hit and it brought home the winning run for the Chiefs. Navarro was the official crumbum of the game, finishing with three fielding errors. Is something wrong at home, Mike?

Jhonatan Solano was the pinch runner for Maldonado:
1. See that mess of a lineup I made? That is because I saw 'Whiting' and thought 'Eli'. Teach me to make assumptions. Next thing you know I'll find out there's another Bazardo in the league not named Yorman.
2. Syracuse starter Yunesky Maya pitched 5 2/3 innings, giving up two runs and striking out five. He is from Cuba and uses a translator.
3. Maldonado doubled twice.
4. Ten strikeouts for Weiland! That's certainly an accomplishment. Now go read this Kevin Thomas joint.
5. Syracuse newspaper guy Lindsay Kramer live blogs the games! Just like Donnie Collins!