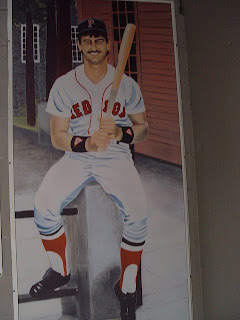 Mike Greenwell is an outfielder who played for the Pawtucket Red Sox in 1985 and 1986. A decade later, Greenwell popped by the park for a game in '95 and three more in '96.

In '85, Greenwell played in 117 games. He hit 13 home runs. No further statistics are available. Like you care what his total bases were.

1986 - Greenwell split his time between Boston and Pawtucket. He had 43 walks and 20 strikeouts, which I LOVE!!!!! Greenwell also hit 18 homers.

It's not easy writing about beloved baseball stars without including their big league time. Yeah, I know, gripe gripe gripe. And Mike Greenwell's in the first base tower lobby. He worked and suffered and struggled for fame.
Posted by Jenks at 7:35 PM