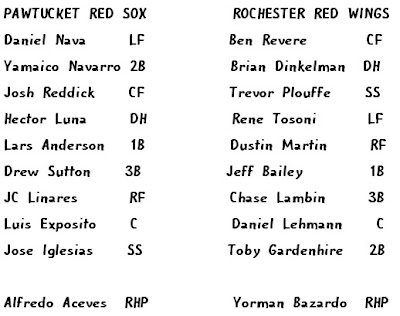 Red Wings take this one 9-7 in one of those weird games. Okay, how do both teams score 16 runs between them and the game was only two hours and twenty minutes? And what the hell did Blondie do to get ejected? Let me take you on a journey... And myself on one, too. Because I'm fucking innocent.

Let's start at the beginning... yada yada. Yorman Bazardo's got the ball for Rochester. Daniel Nava leads off with a single AND HERE WE GO MODEFOQUE!!! Navarro was then hit by a pitch... And then something really cool happened. Josh Reddick tripled and of course Nava and Navarro made it across. 2-0 PawSox! Good triple, Josh Reddick.

Hector Luna followed the triple off with an RBI single, scoring Reddick. Okay, I made the lineup and penciled Luna in and it didn't click, but Hector Luna's on the PawSox! And Drew Sutton! The IL just churns these guys around.

Bazardo escaped the first inning without further fuss, getting a GIDP for most of the outs. 3-0 Pawtucket, but for how long? Until the end of the world or the bottom of the third. Pawtucket starter Alfredo Aceves gave up three consecutive singles like, immediately. Which loaded the bases with no outs. A sac fly by shortstop Trevor Plouffe got the first run across... Then a single... Then the seldom seen sacrifice double play flyout by right fielder Dustin Martin. Hot Canadian piece Rene Tosoni got crazy on the basepaths and wound up out at second base. But that was the end of Aceves' start. Wait, why did he start?

Rochester killed the 3-3 tie in the fourth inning when Matt Fox gave up two solo homers. And on a school night, too. 5-3 Rochester. Pawtucket got one back in the top of the fifth when catcher Luis Exposito hit a solo home run of his own off reliever Anthony Slama.

Look, I'm dancing! Rochester got all high and mighty in the bottom of the fifth inning. Brian Dinkelman singled and then while Plouffe was batting, Fox threw a wild pitch, advancing Dinkelman. Dustin Martin hit a two-run double to make it 7-4 Red Wings. Another wild pitch scored Martin... 8-4 R-Wingz.

Top o' the sixth - Slama still pitching, hits both Navarro and Luna with pitches. This evidently hurt Luna's hand and he had to leave the game. Tony Thomas replaced Luna. Anderson got ejected for strike zone bitching. Drew Sutton hit a two-run double to right, making the score 8-6. Hey, are you done yet? I'm getting tired of holding this.

Okay, cool, I can skip ahead to the bottom of the eighth. With Jason Rice pitching, Rochester catcher Daniel Lehmann hit a solo home run. Danny Lehmann, sorry. 9-6 Rochester.

Wait, one more thing: Drew Sutton hit a solo home run for Pawtucket in the top of the ninth. Something tells me I'm into Sutton good! (Sorry.) Pointless act, though, because Rochester still won. That's okay, they needed it more. Poor little franchise.

I'm growin' an entire crop of marijuana plants in my parents back yard!
1. I don't know if you noticed, but weren't there quite a few solo home runs in this game? The answer is FIVE, even though that wasn't really the question. I break all the rules, tough guy.
2. Toby Gardenhire never hits home runs and everybody loves him. I like his father. You know... I LIKE him, like him.
3. JC Linares went 0-4 with two strikeouts.
4. Some video feat. Chase Lambin here.
5. Evidently Jose Canseco will be appearing at the Rochester ballpark in August.
6. Good game for Dustin Martin, who had three RBI. Who wants to dig a little deeper on this guy? I'll do it someday. There's a lion in that guy's pocket.

This afternoon, please enjoy Kyle Weiland and Anthony Swarzak as they tussle in the Flower City. It's also a holiday for all you non-heathens, so dig that. I am not doing anything today except maybe walk in the sunshine and pick some wildflowers and think about Dustin Martin and Ron Gardenhire.

You know, you might have invited me over. Thanks a lot. I hope you choke on your fucking ham.
Posted by Jenks at 9:36 AM