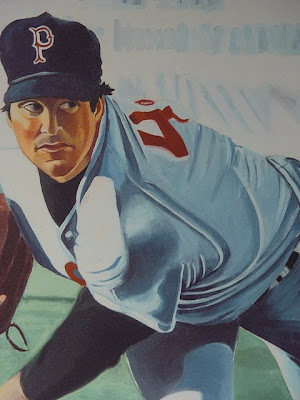 Since last night's game was rained out and I know you want me to be your acrobat, here we have number 47, Bruce Hurst.

Okay, I thought it would be more impressive. Promise me, son, not to do the things I've done. Walk away from numbers if you can.

In '81, Hurst was foolin' around, hittin' the town, growin' his hair. He went 12-7 with a 2.87 ERA. Hurst also pitched five shutout innings in the LGIBH. Good Valentine's.

Two things:
1. "It was unbelievably cold. The wind was blowing straight in. A couple balls that were just crushed got up in that wind and fell straight down. There were no heaters, but they had these big 55-gallon drums they used as trash cans. We were taking the broken bats and burning them in the drums. It was just a cold, cold night, with no relief and the wind cutting through you." - source

I like to think that if I had been there, I would have stayed. But I probably would not have because I find cold weather unbearable. Hey, people who know me, would I have stayed?

2. Bruce Hurst is Mormon? Hurst has a college baseball field named after him? And you say he pitched seven complete games for Pawtucket in 1981? And he was tied for second in the IL that same year with his 12 wins?

WHOA, I almost got socked with a virus doing search engine stuff... See if I ever visit a Baptist church website again!

Bruce Hurst is in the lobby of the first base tower. That's the one no one goes down, so be sure to make a special trip.