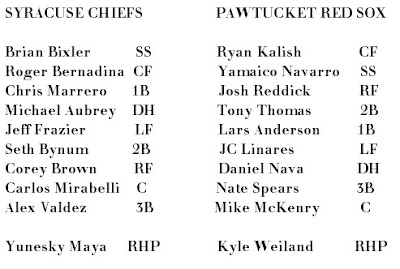 Wait, the interesting thing is that all of the runs in the game were scored in the first two innings. Syracuse scored first, when Bixler and Bernadina led the game off with a single and a double, respectively. First baseman Chris Marrero sac flied, scoring Bixler from third to lay a one-nothing on your cold, wet asses.

Bottom of the first - Kalish, single. Navarro, walk. Reddick, single. POW, bases loaded, no outs. Yunesky Maya, what happened, baby? And then! Tony Thomas steps in and it would have been crazy if he'd hit one out.... But no, he struck out.

What really happened was Lars Anderson hit a two-run single. GOD, WHAT IS HIS PROBLEM?!

Maya managed to dispatch of Linares and Nava to end the inning. But when catcher Mike McKenry walked in the bottom of the third and advanced to second on a balk, Ryan Kalish saw an opportunity to raise his estimation in the eyes of the Savior and hit a liner to right, scoring McKenry. It was Kalish's third double of the year.

The Chiefs were held scoreless by the bullpen, which has been pretty solid so far in April. Boston kid Matt Albers slapped up a couple of innings. Seventeen of Albers' 27 pitches were for strikes. Jason Rice pitched a tidy eighth, and Atchison got the save for the PawSox. That is some fucking teamwork right there. God bless those boys.

vegetable loaf:
1. Yamaico Navarro walked twice. I love seeing this walking from him. Currently, though, Nava is number one on the team for bases on balls. I would not have guessed that.
2. Yunesky Maya wound up throwing 118 pitches. That's quite astonishing. Obviously the Nationals hate his guts, making him do all that in the shitty April weather.
3. Pawtucket's win put them in first place in the IL North division.! Bacon and Biscuits? More like... like... Textiles and water-powered energy!
4. Audio game highlights! I am still VERY ANGRY that archived games are no longer available on the IL site. Maybe I'll record the games on cassette off the radio. I'll just tape over all those Expose and Whitesnake songs.