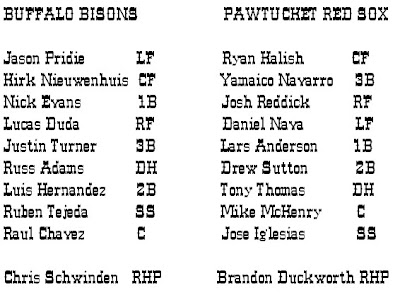 Have you noticed that Pawtucket and Buffalo have been seeing a lot of each other? I think they're secretly bangin'. At any rate, this game was a pretty long dry hump with no release. Tied at one in the ninth and rained out.

Your Red Sox starting pitcher was Mister Brandon Duckworth. Duckworth should be proud of his start, as he went long, hard and deep into the seventh inning... 6 2/3 inches innings in all. He kept the Bisons scoreless until the seventh, getting hoisted off the mound after Justin Turner singled. Okajima inherited Turner, who scored when pinch hitter Zach Lutz doubled.

Duckworth also struck out six and walked a guy. Not bad.

Righty Chris Schwinden (Not Fossum) started for the Bisons. He struck out nine batters through five innings. Wonderful. Schwinden's only run came in the fifth inning, when Tony Thomas led off with a triple to right and then scored on an error by second baseman Luis Hernandez.

Taylor Tankersley, Jose De La Torre, and Justin Hampson combined to provide scoreless relief. Atchison was coming in to pitch for Pawtucket, but the game was called before he threw a pitch.

bzzzzzzzzzzz:
1. Chris Schwinden was called up from double-A and this was his triple-A debut. So hot. I know you wanna fuck him.
2. Drew Sutton struck out three times.
3. Way to squander, squanderers! "The PawSox squandered a scoring opportunity in the eighth, failing to score after getting a man to third with none out. Ryan Kalish reached first after his pop-up down the left-field line was ruled an error off the glove of Bisons shortstop Ruben Tejada. He moved to third on an errant pickoff attempt by Herd pitcher Jose De La Torre. The Herd defense clamped down and got a groundout, pop-up and flyout." - Buffalo newspaper

Game resumes at one this afternoon so everyone can achieve climax. Then the regular game. I cannot attend, so please don't go. I don't want to get jealous and hate you.