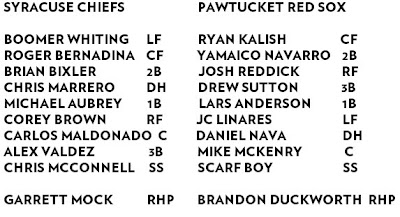 Pawtucket WINS! And how! 14-0. Syracuse starter Garrett Mock is, I suppose, still not fully recovered from his neck injury. Or, most recently, his groin injury. It was perhaps one of the worst starts by a visiting pitcher that I have ever seen. It was hard to watch at times.

Garrett Mock gave up eight runs in two innings. Was Pawtucket cranking out hits? No. It was not a slugfest. It was a walkfest. Seven walks. Seven! Four of the runs were walked in.

Garrett Mock faced five batters in the third inning and could not get an out. Chiefs lefty Lee Hyde took over and was really not much better. Hyde gave up four runs, giving up six hits and walking two. Reliever Adam Carr was really the only effective Syracuse relief, going a couple of scoreless innings and only walking one batter.

The only Chiefs reliever who didn't give up a walk was Jeff Frazier. Who is a position player. Yes, it was that kind of game. I think Josh Wilkie went out and played right field...

I don't even know where to go with this. It was a crazy game and I would have stayed for the whole thing if the wind hadn't been so cold. And lonesome.

break it down:
1. Daniel Nava is a walking MACHINE! Three in this game, making him an IL leader.
2. Reddick and McKenry also took three walks.
3. Nate Spears had to come in for Kalish, who is probably in really big trouble. Spears hit a grand slam and was rewarded with a HBP. He had to have seen that coming.
4. Red Sox starter Brandon Duckworth was terrific again, pitching seven scoreless innings. Clevelan Santeliz finished the game off like a fabulous apricot pie, further demeaning and demoralizing Syracuse.
5. For Syracuse, Corey Brown and Carlos Mirabelli went 2-4. So that was good.
6. Brian Bixler was replaced in this game. I guessed correctly that he'd been called up. BRIAN BIXLER?! Oh, The Nationals.

By the way, Drew Sutton got a hit at the top of the third. He hit the ball leftward and it fell between three Syracuse fielders. It could have been an error. There was no ruling either way when I was there, so everyone was left hanging. UNACCEPTABLE!!!!!

Tomorrow! Rochester? What, again? Pawtucket's not playing a non-NY team until the 26th, when they face Lehigh Valley. You know, the IronPigs. All one word. I have been typing 'Iron Pigs' this whole time and no one corrected me. What am I, Brendan McGair?

In all fairness, McGair's really stepped it up this season, doing some pretty interesting work. That man is getting after it for real! If I ever see him out and about, I'll buy him a beer! But just one, because I like to save my money so I can buy more beer for myself.

Also, I am certain he would act like he had no idea who I was.

EXCELSIOR!
Posted by Jenks at 7:32 PM