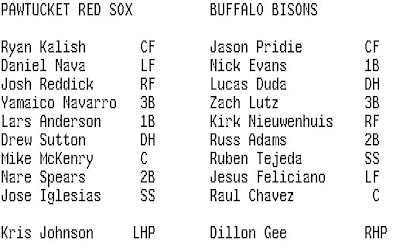 Bisons starter Dillon Gee really got after it this game, pitching seven innings and only allowing one run. He gave up a couple of walks and struck out three Pawtucket batters. And the children of Buffalo were happy again and had pleasant dreams.

Kris Johnson's pitching woes continued as if he'd never had an off-season. I mean, right away, first inning, four singles and a double put a three on the board for the Bisons. A solo home run by first baseman Nick Evans in the second inning made the score 4-0.

In the bottom of the third inning, the first batter Johnson faced, third baseman Zach Lutz, hit a solo homer to center to bump it up to 5-0. Johnson put another couple of runners on base with one out before getting a love letter, and was replaced by the mighty Scott Atchison.

Left fielder Jesus Feliciano dug in against Atchison and hit a line drive to center, scoring Russ Adams. Yes, Russ Adams is still kicking around. A sac fly and a fielding error brought in two more runs. 8-0. And it was only the third inning.

In the fifth inning, Gee walked Josh Reddick, who ran home when Yamaico Navarro hit a line drive double to left. That would be the sole production of Pawtucket. Yamaico Navarro has certainly surprised me with his offense so far. Like this: :O

Atchison returned to pitch a couple more innings and held the Bisons back. Bowden entered the game for some long relief, pitching the final three innings in a scoreless, 90's fashion.

Dillon Gee- Seven innings, 99 pitches. This is remarkable. I have seen the Mets work their minor leaguers like this before, most notably with RA Dickey. And so early in the season! I would say it's crazy and radical, and I suppose it is, but it certainly doesn't seem like the org is getting results from this. If the Mets start rocking and rolling, then I might say, "The Mets have some great young pitching. They really do some smart things in the high minors."

Okay, no, I would probably never say that. Can we talk about Dale Thayer? Dale Thayer pitched the eighth and the ninth and got a couple of K's.

Kris Johnson threw 66 pitches through 2 1/3 innings and now his ERA is 23.14. That kind of job failure often leads to impotence and divorce.

you might as well get used to me coming home a little late:
1. Ryan Kalish made a throwing error, Nate Spears a fielding error.
2. 26 of Bowden's 34 pitches were strikes.
3. Maybe Dillon Gee will be called up soon.
4. Jose Iglesias was caught stealing. Buffalo catcher Raul Chavez is not fucking around back there.
5. Zach Lutz' name starts and ends with 'Z'.
6. "Dillion" Gee. This guy again. Wait, he's in high school? I'm such a jerk.

This afternoon at 2:00 (or some time close to that) it's Kyle Weiland in Syracuse facing either Ross Detwiler or Yunesky Maya. Probably Maya. It's the home opener for Syracuse so you'd better put on a pair of pants!