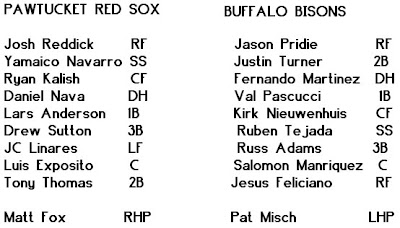 Pawtucket WINS! 8-3 in Buffalo. The delightfully enigmatic Matt Fox gets the win for Pawtucket, pitching six one run innings with four strikeouts.

Buffalo starter Pat Misch stretched himself out to seven innings. He wasn't particularly effective, as evidenced by The Grand Slam. You know.

OH, YOU DIDN'T HEAR ABOUT THE GRAND SLAM? Top of the second, designated hitter Daniel Nava leading off. Nava takes a walk. Then a double by Anderson. Sutton strikes out, but Linares walks to load the bases with one out. Exposito up! Could he do it? No, he popped out, but second baseman Tony Thomas rolled his sleeves up and got the job done! Grand slam to left! Everybody was happy, even Okajima.

I'm sure the 4-1 lead left Fox feeling pretty comfy for the rest of his pitch-scursion. Hideki Okajima pitched a tidy, scoreless seventh and then re-raked the mound before he exited. Michael Bowden (The closer?) handled the last two innings. He walked Jesus Feliciano like a snowball down a mountain, like a carnival balloon. And then who? WHO? Jason Pridie, who is still hanging around like a persistant skin lesion, hit his second home run of the game. Oh, dear, is all I have to say.

So aside from Tony's GS, where did all the other runs come from? Well, there was one in the fifth inning that was a solo home run... And then one in the eighth when Anderson hit an RBI single... Then a deuce in the ninth when Linares led off with a chunky double and advanced to third on a wild pitch by Dale Thayer's mustache. Tony Thomas singled Linares home for one, and then stole second. Another wild pitch from Thayer got Thomas over to third and Navarro grounded to second and got Thomas across the plate. Dale Thayer, wild and woolly and unable to shake the dust off his spurs.

Hold Me Closer:
1. Jason Pridie, guys. Jason Pridie. "My job is to get the team going." Oh, yes, I am quite sure.
2. "He tried to throw a cutter in and the guy has pull power. He got his pitch in the right zone. The inning just got away from [Misch] a little bit." - Bisons manager Tim Teufel on Thomas' slam.
3. Pat Misch had the most wins for a lefty in the IL last year. Thank you, Jay Skurski.
4. Feel free to look over this series preview, too. Yeah, it's late. What do you want? I work full-time and have various social engagements. It's horribly glamorous, you know.
5. Val Pascucci? BITCHIN'. Time for the most excellent Val Pascucci song and let's sing it all day.

This afternoon! Andrew Miller will pitch up against Boof Bonser, who sees no problem with drinking beer right before a game in which he might pitch. Bonser? I hardly knew her! (Sorry.)