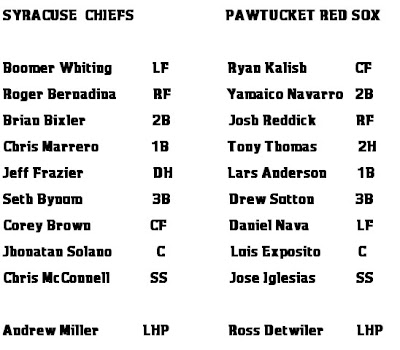 Sorry, Tennessee. Pawtucket relievers finally stumble and blow the game 6-3. Reliever Tony Pena gets the loss, the blown save, the Razzie, and the Grammy for Best Rock Performance by a Duo or Group. Syracuse lefty Ross Detwiler got the win.

Tony Pena pitched the seventh inning and it was raining in his heart. The first batter Pena faced, center fielder Corey Brown, reached first on an error by Anderson. It's really hard to field well when you're stoned. The balls just look so soft and pretty...

Oh, yeah, then Jhonatan Solano homered. It was Solano's second cuadrangular of the year. Pena got the next two batters out, but then Bernadina singled and stole second (I love this guy!) Then, oh, oops, Brian Bixler RBI single. 4-3 Chiefs.

And what about Pawtucket's offense? Yamaico Navarro hit an RBI single in the third. Navarro has been really great so far. I like him so much more than I ever like Jorge Jimenez. There were another couple of runs. but they're too dull to contemplate.

they put you down and shut you out:
1. "Andrew Miller Feeling Good About His Command." That's a weird headline. Next time someone asks how I am, I'll say "I feel good about my command!" I'll say it to my boss. He's a real locked-in corporate conformist. I'll bet he adopts it at his CORPORATE CONFORMIST SUIT MEETINGS!!!!!
2. Tony Thomas was picked off and caught stealing. I still think that cat is crazy.
3. Rich Hill picked off Seth Bynum. Seth Bynum reminds me of Freddy Bynum, who I never much cared for. You know who else bugs me? Mark Ellis. He always looked so pasty and weird to me. No one has ever bought a Mark Ellis jersey.

This is unbearable. Good news, everyone. I get to go to the game today while you're toiling away in your CORPORATE CONFORMIST cubicle. I don't know who is pitching and I don't care. SMASH THE STATE! YOU CAN CRUSH US, YOU CAN BRUISE US!