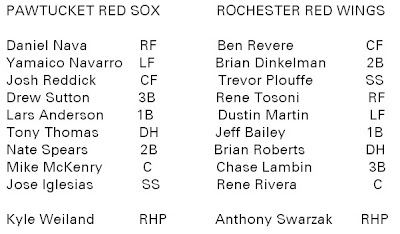 Rochester starting pitcher Anthony Swarzak did what now? Allowed seven runs on eight hits? And you say he pitched into the fifth inning before being replaced by Rene Tosoni? Well, shut your fucking mouth because Rene Tosoni is a position player, not a relief pitcher! It was in fact righty Carlos Gutierrez who took over for Swarzak and worked really hard for that last out in the fifth.

See, what had happened was the Red Sox were already up 3-0, but after Nava led off the fifth with a flyout, Navarro singled. And then Reddick flied out to center. So, easy, right>? Two outs? But Swarzak walked Drew Sutton and then Anderson to load the bases for Tony Thomas. You may be tempted to call him Tony the Tiger, but please don't. Thomas hit an RBI single and that was the end of the night for Swarzak.

And just as I mentioned earlier, Carlos Gutierrez jumped into the fire. Nate Spears was the first batter he faced and Spears hit a two-run single. So that was kind of a bummer. Even worse, McKenry hit an RBI single. At that point it was 7-0 and really, your heart just goes out to this team. Tough couple of years.

Rochester did score in the sixth, thanks to solo home run by catcher Rene Rivera. And the Wings scored another pair in the eighth when Clevelan Santeliz ran into some turbulance. But Drew Sutton hit a ground rule double in the top of the ninth which worked out great because Nate Spears was really working his magic bat. Spears singled, drove in Sutton... Wait, Tony Thomas was on base, too, because he'd walked... McKenry singled, too... And then I was driving and the road just kind of turned into a giant squid but my brakes didn't work... And then Jose Iglesias grounded into a double play but instead of Trevor Plouffe playing short it was my mother-in-law...

Well, what did you expect? Pawtucket had 15 hits. And it could all dry up when they face the Scrankees and the G-Braves and the Bats. There's a lot of season left.

Oops, in all the confusion I almost forgot Kyle Weiland. Weiland pitched six strong, 77 pitches and only one run on two hits. Bowden pitched the ninth, one two three. Something is clicking for Bowden as a closer-style pitcher. Do you find that interesting? Do you want to start a new post on the forum about it? I think you should do that.

cookies:
1. Drew Sutton went 3-4 with two doubles and he's TORRID IN NEW YORK. I try not to spit cliches, but that sounds like a great live album title.
2. Nate Spears also had three hits. Daniel Nava went 0-5. He should add "RRO" to the end of his name and start driving in some runs.
3. Carlos Gutierrez is some kind of first-round draft pick, who's still pretty zippy after Tommy John. Read all about how impressive and sexy he is here.
4. And Gutierrez on a podcast here at the world famous 'Seth Speaks'.
5. Jose Iglesias went 0-5 with three strikeouts. Everybody, commence panicking. Please program the sports radio station into your speed dial so you can shit-talk the kid, the organization, and Carl Crawford.

Today was a great day to do not much of anything. How bad do you not want to go to work tomorrow? Especially since you have that conference call.

Tomorrow! Rochester at about 6. Andrew Miller and Dorothy Manship.