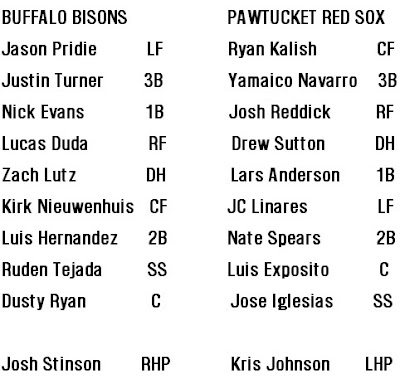 Okay, let's get crackalackin. Things looked shaky for Johnson in the first inning when he immediately gave up a single to Jason Pridie to lead the game off. Justin Turner hopped on the downtown train and doubled to left to put runners on the corners. A sac fly by first basedude Nick Evans scored Pridie and a double by DH Zach Lutz put the Bisons up 2-0.

Pawtucket failed to respond until the bottom of the third, when Exposito, Sutton, and Anderson all doubled. I don't feel the need to hash over who did what, but Kalish singled and Navarro walked and Reddick stole second in some order. When the dust settled it was 4-2.

The Red Sox put up a deuce in the bottom of the fourth, courtesy of a Nate Spears solo homer and an RBI double by Navarro. Navarro again! I might be getting excited about him.

Bisons lefty Michael O'Connor put his beer down and came out of the bullpen for the fifth inning. O'Connor got Drew Sutton to pop out, but Anderson lined a single to left and Nate spears walked and stuff... Gaaaah.

Do we really need to finish this? It's not like anyone's reading it. I'll skip to the end.

Man and wife:
1. Wait, Rich Hill! I love that guy! Hill saved the game because Jason Rice was having a rough go. He pitched almost three innings. Still hasn't given up a run. I wanna wear his jacket. I saw a picture of him holding two cats and let me tell you, you would just lose it if you saw it. He looks like a PIMP.
2. Matt "Fat" Albers also did some relief work.
3. Is Dusty Ryan the Matt Lecroy of Buffalo? Four stolen bases by four runners, see if you can guess who. One of them is not Drew Sutton. Also, Ethel did not bring gelatin to the party, but she wore a green hat.
4. When I was in Buffalo I ate at this cute neighborhood breakfast place that had terrific home fries. It was mildly arty and on a one-way street. Just outside downtown. I cannot remember the name so I am hoping you can help me.
5. Buffalo starter Josh Stinson was called up from double-A to replace Dillon Gee, who's with the Mets now.

No, not popcorn. Are you kidding me? I don't eat popcorn. Jesus Christ, put down the bong.
Posted by Jenks at 12:07 PM

Drat! I missed the opportunity to say "Here's a picture of Rich Hill surrounded by pussy."