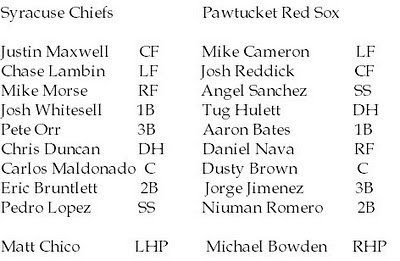 This was the best PawSox game I've been to in a while. Great crowd, too. Very fun. Not too cold. 4-2 Pawtucket! That feels much better.

Chad Paronto pitched a good sixth and seventh inning, but Fernando Cabrera knocked me out in the eighth inning. I am not just saying this because of his celestial good looks. Cabrera's been struggling lately but he looked deadly last night. It was encouraging. Nice, huge staggering whiffs from Syracuse.

The formerly flawless Robert Manuel made me make the disapproving Marge Simpson noise in the ninth when he kicked things off with a walk and a single. Manuel kept missing the zone and things did not look good. Syracuse made a sincere effort and put in pinch hitters (JEALOUS) but Manuel effected a DP with Mench to seize the game.

The rehabbing gent Mike Cameron must have had fun last night! Cameron hit a two-run homer in the third and made some lovely defensive plays in left. He also makes sure to water the plants around the office.

First baseman Aaron Bates hit an RBI single in the sixth and Jorge Jimenez scored the fourth Pawtucket run in the seventh by way of an error.

i like my sugar sweet:
1. Center fielder Justin Maxwell was the leadoff batter for the Chiefs. I saw him by the visitor's dugout and you would not believe how hot he is up close. Oh my god. I realize it is unprofessional of me to say such things, but damn.
2. Daniel Nava and Tug Hulett had tough nights, both going 0-4 with two strikeouts.
3. THIS game summary blows my shit out of the water.
4. Josh Wilkie pitched a couple of innings for Syracuse and didn't give up any hits or walks, but he struck out four batters. He was cool to watch. And yopu can read a romantic story about Wilkie here.
5. The Chiefs may become an exciting visiting team. I never thought I would say that, but they have some ish going on. And not just because of SS.
6. MALDONADO!!!
7. You should also see Robert Manuel pitch. He looks all weird and knock-kneed.

Tonight! Who? Randor Bierd? Whatever, have fun as Pawtucket starts to shake off the lethargy.
Posted by Jenks at 9:22 AM