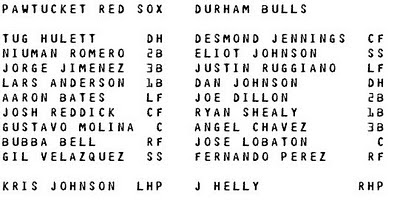 Looks like I should have picked Durham as my secret triple-A vacation. Bulls starter and gaming enthusiast Jeremy Hellickson pitched five..., whoops, make that six... WHAT. Hellickson pitched eight innings. One walk, one hit, five strikeouts. 96 pitches. I think he is going to kill me!

Durham first baseman Ryan Shealy hit a solo home run in the second inning and that was all they needed. Aaron Bates got the only hit for Pawtucket, a single.

Josh Reddick is no longer the leadoff hitter. Reddick has some serious problems at the plate right now. Tug Hulett batted first, but that is maybe not who I would have put there. How about Angel Sanchez? No one on this team's stealing bases, anyway... Pawtucket has less SB than anyone in the IL!

Let's all just focus, here:
1. Hellickson is ready, but are the Rays?
2. Six-man rotation in Tampa featuring JH?
3. Hellickson is a hot shot.
4. JH is Tampa's number two pitching prospect.
5. Strasburg is not the only flame in town.
6. Fantasy evaluation from January. No, you should read it, it's good.
7. Scouting report... with video!
8. Is Hellickson gonna get some work in Tampa this year? No? And for crying out loud... Hellboy? Weak scene.