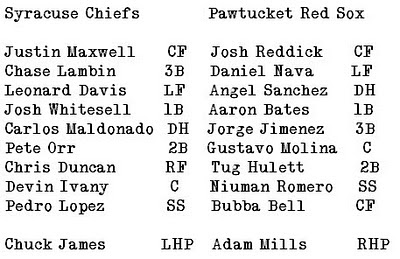 More Syracuse, more winning. You know what I did last night? I read my blog through an online translator. In Spanish. It was so great. TJ GRANDE!!!

That's all I did, though. Other than that I just sat in the darkness staring into nothing, spitting up pieces of my broken luck.

Pawtucket won 3-1, thanks to Fernando Cabrera. Oh, sure, other people were involved. But those people were sweaty and unattractive.

But, seriously. Adam Mills had a great start. Five two-hit innings and one tiny run. But Joe Nelson got the win even though he only faced one batter and got him to fly out. I'm sure Nelson was man enough to take Mills aside and say, "This was all yours, brah." I know this because that is how jocks express emotions.

No, no, seriously. Did you know that Pawtucket got 14 hits and left 10 batters on base? You can thank Tug Hulett, Josh Reddick, and Angel Sanchez for that. Those three no-goodniks each came up twice with two outs and RISP and did not produce a run.

You know what? It doesn't matter. They won, and that's the important thing. That's what scouts look at - not clutch production or timely hitting, but whether the minor league team defeated the other minor league team in some ballpark in Rhode Island. And french fry deliciousness is also key, since scouts have notoriously bad eating habits. McCoy Stadium has that in the bag. NEVER CHANGE THE FRENCH FRIES!!!

but, seriously:
1. Jorge Jimenez went 4-4. Josh Reddick went 0-5 with two strikeouts. Reddick's plate production is in the toilet right now. He's like... Ken Huckaby!
2. This paper saves newsprint by combining two game summaries in one article. What a great idea! I should try that.
3. Everyone is talking about the Chiefs pitcher who got called up pretty much in the middle of the game, which is a great story but as overplayed as a top 40 track. I love how Pawtucket is only interesting if something big league happens.
4. That's where I come in!
5. Former Pawtucket warm body Chris Duncan was responsible for Syracuse's lone RBI.

Today! Boof Bonser v JD Martin. Ellsbury will be there, so that means I am one step closer to the return of Darnell McDonald!!