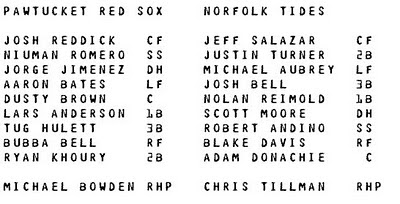 Norfolk Tides win, 5-2. Bowden gets the loss, although his line varies slightly inasmuch as he pitched an entire seven innings.

Bowden's most notable number from last night's game is the three home runs he gave up to the training-bra Orioles. Designated hitter Scott Moore hit two of them. Yeah, how can pitchers stand a chance when they're faced with the Real Ultimate Power of Scott... MOORE!?

Tides pitcher Chris Tillman also got seven innings in, but he looked a lot prettier. Tillman didn't give up any runs, see? Relievers Pedro Viola and Dennis Sarfate gave up a Pawtucket run each.

The Red Sox didn't score until the eighth inning, when Niuman Romero followed up Ryan Khoury's double with an RBI single. Angel Sanchez could have helped out, but Boston spirited him away. Jerks.

what a price to pay:
1. Ramon A Ramirez pitched a scoreless eighth inning.
2. Nolan Reimold is a Tide after being demoted from Baltimore for overall crappy performance. The first base thing is an experiment that is not likely to go well.
3. Because remember the painful attempt to make Brandon Moss a first baseman? That was one of the most tragic things I've seen in baseball. See also: Javier Lopez playing the outfield in Boston.
4. Angel Sanchez should be back in a couple of days. Hope they staple Darnell McDonald to him!

Tonite only: Pocket lefty Fabio Castro v Jake Arrietta. So enjoy that.
Posted by Jenks at 8:15 AM