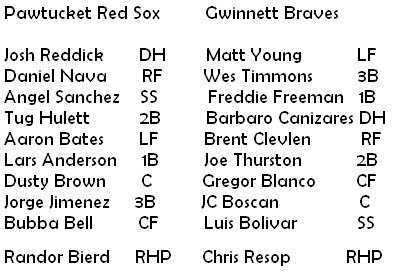 Randor Bierd... yeah. What a bunch of bums in the Pawtucket starting rotation! OH MY GOD. I'm amazed they weren't swept down in Georgia. The relief pitching has been the gooey glue keeping games together.

Righty Chris Resop started for the Braves and could have gotten the win, except reliever Cory Gearrin (who?!) blew it in the ninth inning. THREE OUTS, GEARRIN. IS THAT TOO MUCH TO ASK FOR??

Hey, it would have been exciting for Pawtucket fans. The score is 5-4 Braves. Aaron Bates led off the top of the ninth with a walk. I love rallies that start with leadoff walks! It's a lot more dramatic than a home run or a bases-clearing double. It's like a well-executed horror movie... little shivers of tension and fear leading up to a shrieking bloodbath!!

So Bates walks and cue dramatic music. Niuman Romero pinch runs and steals second. And then there was an on-field delay. I don't know, that's what it says in the game log. Lars Anderson walks. And Dusty Brown sac bunts! What a great idea with no outs! Why don't I ever see games like this?

Runners at second and third, pitching change. Jorge Jimenez at bat... he gets hit! Bases are loaded! WOMAN AT HOME ALONE HEARS A SUSPICIOUS NOISE AND SHE CREEPS DOWN THE STAIRS IN THE DARK!!!

So what happens next is Bubba Bell flies out to center, allowing Romero to dash home. And Reddick hits an RBI single. There's your hacking splatter climax. SUSPIRIA!!!

And they can't even have a proper post-game celebration. Oh, well. Atlanta's overrated anyway.

i ain't no american pie:
1. Is 'Resop' even a real name? It's poser spelled backwards. I'll bet he listens to NOFX.
2. Angel Sanchez tripled. And doubled. He is so valuable to the team. I am going to write a novel about him. And then set it on fire by the McCoy turnstiles. That is how passionate I am about middling triple-A guys that no one cares about.
3. The Red Sox executed four double plays. WHY WAS I NOT AT THIS GAME?
4. Freddie Freeman doubled twice. Great baseball name. Great name, period. How can anyone forget it?
5. The G-Braves celebrated Cinco de Mayo a day early, which is a weak scene. It's totally THAT kind of ballpark. They probably have crap contests on the field between innings, like sumo wrestling and dizzy bat races. WEAK. I'm so glad Pawtucket's not like that.
6. Why can't someone do a G-Braves blog? I want one for every team in the IL. We could become a powerhouse. Most importantly, I'd have great sources to steal information from.
7. Robert Manuel returned to form and closed the game out. Hitlessly. Scorelessly. He even struck out Brent Clevlen. Fernando Cabrera was taking a nap during all of this. He never gets to bed on time, that guy.

No game tonight! It's an off day in Charlotte (ish). I would love to go to Charlotte, so I don't wanna hear any bitching about it. See you later!
Posted by Jenks at 10:30 AM