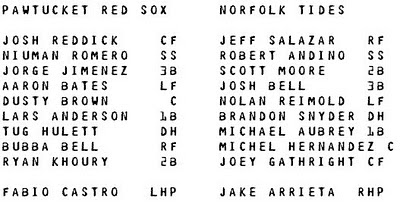 8-1 Norfolk, and Pawtucket was shut out until the ninth. Fabio Castro got the loss, but that is not really the point.

The point is Jake Arrieta pitched seven shutout innings and had TEN STRIKEOUTS. Arrieta's first K was also the first batter he faced, that being Josh Reddick. Not too interesting, since Reddick strikes out more than anyone on the team. And, seriously, it's not like he's Daniel Nava who also strikes out a lot, but leads the team in OBP.

But, again, that's not the point. Arrieta struck out Brown and Anderson in the second, Niuman R. in the fourth, Jorge Jimenez and Romero again in the fifth, Aaron Bates in the sixth... and then, the seventh inning, is Arrieta tired from being awesome? Hell no. He faced Bell, Khoury, and Reddick and struck out each of them in succession.

And that is the effing point.

migajas:
1. Poor little Josh Reddick. Waaah.
2. I'm sorry, that was insensitive. It's difficult to muster any sympathy for a professional baseball player when HOW AM I GOING TO PAY MY GAS BILL and MY CAR IS TEN YEARS OLD and I HAVE NO MONEY IN LIFE and WHAT COLOR ARE THE DRAPES IN DEBTOR'S PRISON?
3. The Red Sox sole run was a Lars Anderson home run. There is not much more lonely in baseball than a ninth inning solo home run when you are down by like eight runs.
4. This game summary includes video and I like it. I also find it interesting that they spell Paw-Sox with a hyphen. Paw-Sox! Although the TV guy has a weird, nasally voice.
5. Niuman Romero struck out three times. He also has a regrettable haircut.
6. How come Pawtucket doesn't have a wacky sports guy? I could be that guy! Oh, no!
7. Did Robert Andino hit a home run? Yes, he did. His roster photo is funny!
8. Every PawSox player struck out at least once. Damn, Arrieta!
9. The Tides Scott Moore and Brandon Snyder had three RBI apiece.
10. Fernando Cabrera pitched a scoreless eighth inning, striking out two of the three batters he faced. Ten of his fifteen pitches were strikes. The Tides were helpless in the face of Cabrera's relentless handsomery.

TONIGHT. More Tides! And then... Durham. And if something gets in your way... turn.
Posted by Jenks at 7:44 AM