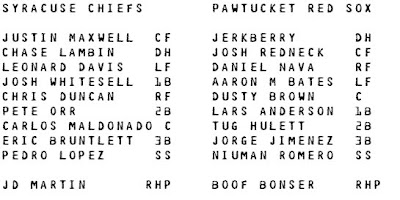 Chiefs avoid the sweep and win 5-4.

Boof Bonser got the start and was... adequate. But that's another story for some other people. What I really want to talk about is Josh Reddick. But just for a few seconds.

It was the best of times, it was the worst of times. It was the seventh inning at McCoy Stadium and Jason Bergmann had come in for JD Martin (who, by the way, did a great job up until the sixth). Jorge Jimenez had doubled and was hanging out, talking to Pete Orr or whoever. Pedro Lopez, probably. So with two outs, Ellsbury walks and Josh Reddick hits the ball hard to right. Chris Duncan has a hard time coming up with it and Ellsbury scores... Josh Reddick is running his ass off and Lovullo is furiously waving him in but the incredible edible Carlos Maldonado is waiting with the ball. Reddick tries to dodge Maldonado but YEAH RIGHT and he is out and he tumbles down to the ground. It looked painful and N. Romero helped him up but he was okay.

Sometimes I think Josh Reddick is really dumb, although it was his manager waving him in. I don't know about that guy.

Joe Nelson took the loss for Pawtucket. Nelson gave up a couple of runs in the eighth. It's mostly Chris Duncan's fault... not only did CD hit a home run off Chad Paronto, but he walked and stole second in the eighth which was great news for Eric Bruntlett, who then hit an RBI double. What did he ever do in Pawtucket? Stupid Chris Duncan.

That's all I feel like talking about, but I will make a list:
1. Boof Bonser looks angry when he pitches. I bet he gets really annoyed when people call him "Boff".
2. When a player leaves in the middle of the game, it's either a) injury or b) call-up. Although Daniel Nava is a supreme being, he is not in a position to head to New York. So it turns out he felt a tug at his anatomy... oblique. And he is okay.
3. Josh Reddick had three RBI and that is fantastic. Lars Anderson was 0-4 with a strikeout.
4. Robert Manuel pitched a perfect, scoreless ninth inning. I'm going to mail him a card with ten dollars in it for his birthday.
5. Which is July 9th. Don't forget!
6. Designated hitter Chase Lambin also tripled.
7. It was great to see some of the cool kidz at the park! There needs to be a jamboree at some point.

Tomorrow... Fabio Castro? I don't remember, don't feel like looking it up, Red Sox hit the road to face the mighty Norfolk Tides.