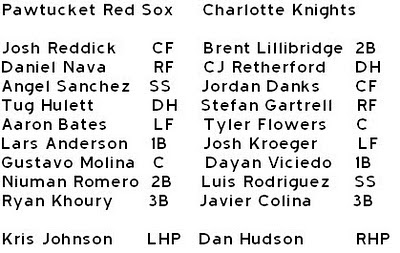 Charlotte takes it 8-4. They could be winning more games if Handsome Frandsen was still around.

Your losing pitcher was lefty Kris Johnson. Johnson was faced with the arduous task of pitching five innings or something and it just didn't happen. He gave up six runs on seven hits, including a Javier(not Alvin) Colina home run in the fourth.

TJ Large was the Effective Reliever of the Night. Large pitched 2 2/3 scoreless innings. Large is listed at 6'4" and 185 lbs. Would we... say he weighs 185? He's not chubby, but those figures depict a willowy human and Large really is not.

Robert Manuel came in for the eighth with Pawtucket behind 6-4. Manuel gave up the last pair of runs when Javier Colina hit a two-run double. Him again?

Dan Hudson was credited with the win for Charlotte. Ryan Braun got the save. It still amazes me that there's more than one Ryan Braun. Pawtucket scored some runs, but aside from Tug Hulett's homer it was kind of a snooze.

who is this garcia guy on the cardinals?
1. I'm asking you.
2. Looks like the Charlotte newspapers took the day off. There's no information on this game. What the fuck?

Today I'm going to a Sea Dogs game out in Connecticut. So that should be good.
Posted by Jenks at 8:26 AM