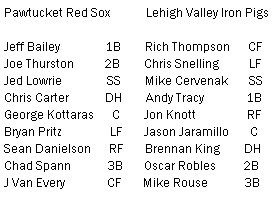 Clay Buchholz started for Pawtucket and pitched six innings. He gave up one run on six hits. Buchholz also walked a pair of batters and struck out eight.

Hunter Jones pitched two innings and gave up three hits but did not allow any runners to score. Chris Smith pitched a scoreless ninth inning.

The left-handed Okie Les Walrond started for the Iron Pigs. Walrond gave up all five runs (two unearned) in his six innings. Two runs scored in the second inning due to Walrond's throwing error. He also walked six batters while striking out eight. John Ennis and Jason Anderson comprised the game's relief corps.

Jonathan Van Every cranked out his thirteenth home run of the year.

Wonder twins Chris Carter and George Kottaras both went 0-5 with two strikeouts. It's okay, the team won, no big deal.

Respect my prioritahs!
1. The big news over there in Allentown is that Daisuke Matsuzaka is going to rehab-pitch for Pawtucket tomorrow. It has eclipsed practically all other game coverage. Thanks a lot, news sources!
2. Big giant Iron Pigs clubber Val Pascucci was released by the team back in April, due to lack of clobbering. He's since been signed by the Mets and is playing for the New Orleans Zephyrs (AAA). His swing has reheated in the PCL.