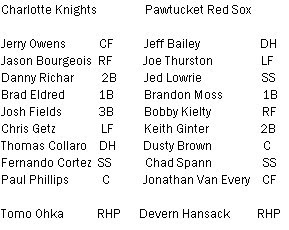 Devern Hansack looked pretty good in the first six innings. Three runs is not bad! Seventh inning? He gave up four more runs. Yeah, three singles and a walk and a run scored on a wild pitch. Hansack leaves with the bases loaded and then Michael Tejera comes in? Hey, isn't he a starter? Tejera promptly allowed all his inherited runners to score. Oops, sorry, bro.

Tejera then went on to allow another pair of runs to score. So that was good! Eric Hull pitched the eighth inning. And this game was played in Charlotte so my lineups are backward. Tough shit, I am not fixing that.

Beloved former PawSox pitcher Tomo Ohka started for Charlotte. Ohka threw a perfect game for Pawtucket back in 2000... I wasn't there so I can't prove anything. Three years later, a skinny douchebag from Florida would pitch his own perfect game. Wow, whatever happened to that guy?

At any rate, Ohka pitched six innings and allowed three runs. Bailey and Keith Ginter each homered off him. Ohka also struck out seven PawSox batters: Brandon Moss twice, Van Every, Bailey, Jed Lowrie, Spann and Keilty. Adam Russell, Jason Childers, and Matt Anderson all pitched an inning or so. Wow, I love Adam Russell! I've been following his career since he was selected sixth round by the Chicago White Sox in the first-year player draft in 2004! Remember when he went 9-11 in his first full year at Double-A Birmingham? SEXXY!!

Joe Thurston and Bobby Kielty both went 0-4. Chad Spann made a throwing error in the third inning, resulting in Jason Bourgeois advancing from first to third.

For the Knights, Chris Getz, Fernando Cortez, and Brad Eldred all homered off Hansack.

yeah, yeah:
1. Lincoln Holdzkom is back, all better now. Kyle Snyder's on the DL with a groin strain.
2. ZZZZZZZZZZZZZ