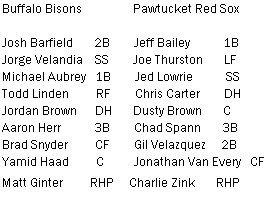 Charlie Zink is once again the cherry on the ice cream on the cheese slice on the apple pie on the plate on the counter of the diner that's right next to the UNSTOPPABLE KNUCKLEBALL MACHINE BAR AND GRILL!!!! Zink went eight innings and only gave up one run on four hits. One walk, two Ks. Fourteen of his outs were fly balls. He kind of wiped out briefly in the seventh but after a quick checkup he was fine. Zink threw 108 pitches. Damn. And they let him do it because he's getting called up. I heard. From Mildred next door. She told me as she was beating her braided rugs in the yard.

Michael Tejera pitched the ninth inning. He struck out Aaron Herr to end the game. Next he'll strike out hunger to end the starvation crisis.

Matt Ginter started for the Bisons. He used to pitch for Pawtucket, remember? Yeah, he played the banjo. I almost got him confused with Mike Burns. Ginter pitched six innings and gave up seven runs on nine hits. He walked a couple of guys... Carter homered off him in the fifth... then he built a birdhouse with his own two hands...

So as I said, Chris Carter hit a home run. Then he went and pumped some iron. Van Every also homered, off Jensen Lewis and his spastic leg-kicking delivery.

Puzzle piece Sean Danielson doubled and stole a base.

For Buffalo, Jason Cooper was a hottie.

i work til i ache my bones:
1. Dusty Brown shaved his head. He looks like a mental patient in red shinguards.
2. Hey! I saw Bryan Pritz. Maybe he'll be back soon.
3. Nights off for Kottaras, Ginter.
4. In a related story, I'll bet Michael Tejera LOVES his new role as a reliever!
5. The visitors' bullpen doesn't seem to have a bathroom. I saw relievers jumping over the fence to use the facilities over there. I can't imagine running into a guy in full uniform in the public lav.
6. If you think you can handle a little beatboxing, please enjoy this video of baseball players making an album. Matt Ginter and Sean Casey are featured...but ou est Crisp?
7. WHIP it good: Zink, 1.06. Fifth in the IL.

Tomorrow is Devern Hansack opposing... Brooklyn's John Halama? And I have to MISS this? Oh my god.
Posted by Jenks at 10:38 PM