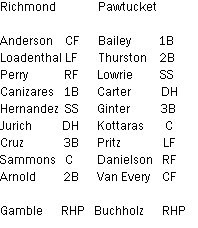 Clay Buchholz pitched his way into the seventh inning. Read about it somewhere else.

Eric Hull pitched 1 1/3 innings and did not allow a run. Neither did Lincoln Holdzkom. It was great.

Richmond starter Jerome Gamble did not last long. He gave up two runs in the second inning and five more in the fourth before getting escorted off the mound. I guess he was not prepared for the UNHOLY TERROR OF BRYAN PRITZ AND HIS TWO DOUBLES.

Braves relievers Zach Schreiber, Jeff Ridgway, Jorge Julio, and Andy Shibilo chipped away at the rest of the game.

For Richmond, Barbaro Canizares (great name, by the way) hit a solo home run to put the Braves in the "1" column.

these are things i like:
1. One fan's account of his visit to Pawtucket: "McCoy has a pretty field, with lots of foul territory, which is one of its chief liabilities—the fans are too far from the action. Then again, the PawSox do nothing to take advantage of that space to make it a fun, family friendly experience. Other than the mascot once, power shooting soft baseballs into the stands, there were absolutely no between innings experiences. No kids on the field racing or wearing costumes or involved in guessing games. Nothing, nada, zilch."
Wow, I guess that's why the PawSox are so unpopular and have such low attendance figures and the management gets absolutely no respect... oh, wait.

Tonight it looks like Mike Timlin's going to rehab pitch at McCoy. It is also the last game of the homestand (they're heading to Rochester/Syracuse). I think you should go to this game. I'll be there, and what's better than that?