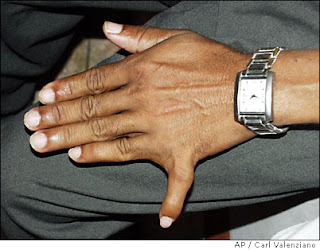 Clay Buchholz was yr starting pitcher. Buchholz semi-labored through three innings, running his pitch count up to 73. It took forever... Buchholz is a slowpoke between pitches. Jose Vaquedano came in for two innings and tacked three runs onto Buchholz's two. Jon Switzer pitched three and change and gave up five runs.

Chris Smith got the last two outs with a double play. Smith has been great.

Righty Jeff Harris was the Buffalo starter. I was hoping that six finger satellite reliever Oneli Perez would come in, but he did not. I did get a gander at his handful. Neat-o! We had some Mastney, Rundles and Buzachero as well. Pawtucket did not score enough runs, although Chris Carter homered. Carter is just CRAZY right now, up to 43 RBI. There were five hits up against Buffalo's 16. Ooooooh.

Impko Presskal:
1. I was wrong about this game being well-attended. I guess the heat kept people in lockdown mode. What, is Lou Merloni not enough?
2. Look, I KNOW Charlie Zink is not being called up. I get it. But tell me this: Why was he dicking around with a baseball bat? BECAUSE HE MIGHT BE PITCHING IN UPCOMING INTERLEAGUE GAMES?
3. Jeff Bailey rested. Bobby Kielty seems to be playing like every other game.
4. The Bisons' relievers were using binoculars in their bullpen. I don't know if that's against the rules or not but it is certainly sheisty.
5. Bob Tewksbury was in the house, dishing out his psych. DO IT!
6. Game temp is listed at 99 degrees, but it's a little cooler in McCoy's confines.

The Bisons are blowing town tonight, but don't worry. They'll be back in late August. Let's get to these Louisville Bats and their prospecty goodness, okay?

I was pretty impressed with Carter. It was weird because we went to the kooky brawl of a game last week and saw him play at Fenway and then saw him play again in Pawtucket. That's a lot of Carter in a short time.

I'd say that being at McCoy feels like "summer" to me than being at Fenway. I can't explain why.

I know what you mean about the 'summery' feel of McCoy. Makes me want to put my feet up (but not watch TV).